Hello and Greetings from . . .   Canada
My name is BUTTER-CUP and I am the Travelling Ambassador for the MAVERICKS SQUARE DANCE CLUB located in Victoria, British Columbia, CANADA. Canada’s Oldest Continually Dancing Square Dance Club (founded in February, 1952). I left to begin my travels on October, 2015.

I am the second Travelling Ambassador of this club. The original was BUDDY (my twin brother). Buddy began his travels in 2008. For a period of 6 years he was passed around from club to club and during those years travelled throughout BC, then onto Ontario, Nova Scotia, Japan, Italy, UK, and throughout Europe and spent a considerable time in  Germany.

Buddy was a wonderful ambassador for the Mavericks and Square Dancing internationally, but unfortunately, he went missing-in-action and we have been trying to track him for over a year to no avail.  We hope that he will turn up one day and be returned to his home in Victoria, B.C.

Would you please help me continue my travels and spread the good wishes of the Members of the MAVERICKS SQUARE DANCE CLUB  throughout the world.
Contact Us About Buttercup
With Many Thanks
Lorne-Barbara Clayton
Past Caller Couple Mavericks Square Dance Club
Contact Us

IF YOU ARE EVER IN VICTORIA PLEASE CONNECT WITH US !!!
TheMavericks.org

Buttercup has been pasturing in Thailand, and says she's ready to venture back out into the world.

Note: Most of Buttercup's photos will pop-up a bigger version if you click/tap on them. 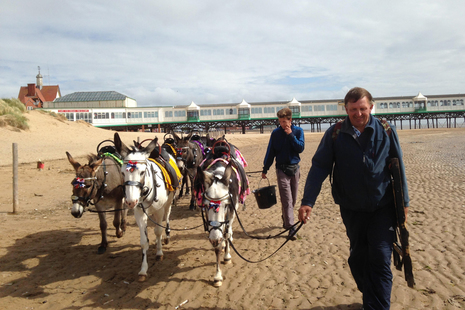 Would you like to dance for a week? that's what I did at Lytham, near Blackpool, U.K. in August, 2016. There were 3 callers, 2 cuers and 3 rooms - with a variety of dancing each day, from plus to C2 and rounds. Bronc Wise (USA) was one of the callers. Great fun.

Blackpool is a seaside town, with amusement parks, musical theatres, huge tide on sandy beaches, donkey rides and the famous Blackpool Tower. - all the fun of a seaside holiday.

The Ides of August 2016 Buttercup Update

Wow - I've been to Stratford-Upon-Avon, Shakespeare's birthplace. There are famous theatres and the Avon River, with swans and canal boats and tourists. There were also 850 dancers at the European Convention - from 21 countries.

Evert and Bozena from Sweden handed me onto Doona Young from Australia. Doona loves to dance and travel - so I'm excited to visit new clubs all over the world. Doona is dressed in yellow in the photo.

Hugs from Buttercup and Doona

Here are some travelling news from Buttercup. She`s be travelling with us for some more weeks. We are going to New Mexico Statefestival at Farmington 13-15th of may.

Greetings from Lesley and Tommy 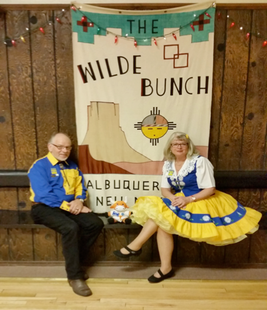 Oh what a trip! We flew from Gothenburg Sweden,  we changed to a Boing 707 in London going to Dallas where we had to wait a very long time to finally get to Albuquerque! But we landed safely so it was not too bad.

Here we are at the Albuquerque dance hall. My friends were dressed in there Swedish ”national” dress and got very admired!  And everyone
(well… some) wanted me to tell the story how I travel!

We danced for several days in this hall. Many good friends and good callers among them Mike Seestrom! Love that man!

I´m quite a celebrity! Yours cincerly Ms Buttercup

Hello! Here I am with Lesley , Tommy and the fantastic caller Stefan Sidholm celebrating the 27th year in a row he has been calling at the Western Airport squaredanceclub. Oh all those interesting patterns he called! But I think my friends did good! So I´m in good hands.

Looking forward to next trip!

Love from Buttercup in Sweden 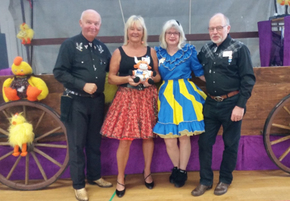 Here are my friends Hans and Ingela who brought me all the way from Hawaii to Sweden when they handed  me over to my new friends Lesley and Tommy at the Easter festival in Örebro. We had a good time dancing with many good friends and callers too.  Jack Borgström, Thomas Hedberg and Thomas Berhed to mention some of them.  So now my new friends are ready to take me to new interesting places and dances. Looking forward to that! 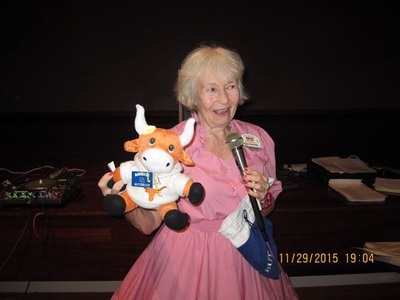 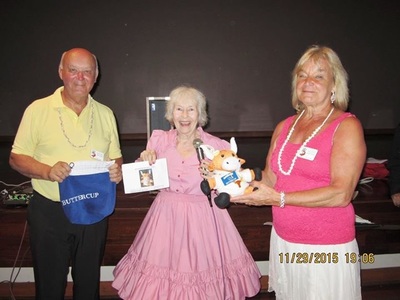 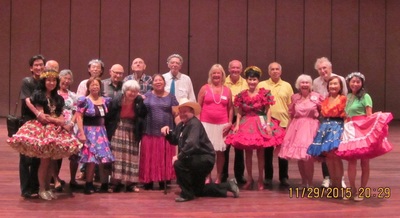 Buddy has wandered off somewhere in Europe, so off his sister, Buttercup, goes to see if she can find him.

it's my pleasure to inform you, that Buddy is on tour again. Although he DID like to be with us in Munich, he was unpatient enough to pick up the opportunity going on to Trier. Trier is the oldest city in Germany - 2000 years old - situated in the western part near Luxembourg. The host club is named Porta Nigra Zoomers. Probably they did write you meanwhile about Buddy's change to Trier.

Greetings to Canada. Perhaps we meet in March 14 in Munich :-)

May 12  Hosted by Walt- Juli  Burr Caller from England UK 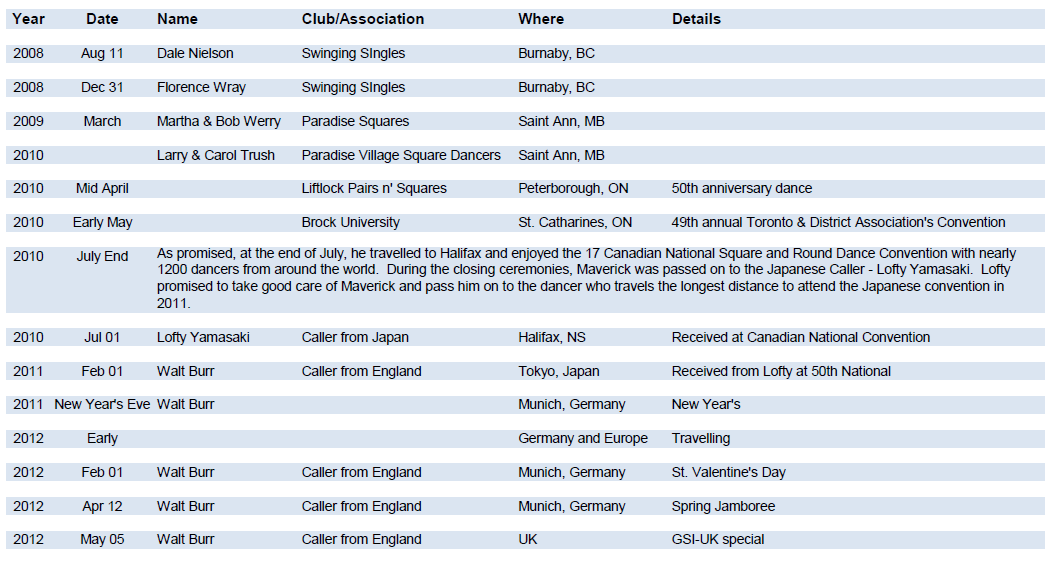